Appreciation of the late Diarmuid Desmond

It was with a deep sense of sadness that we learned of the untimely passing of Diarmuid Desmond. A true Ballinteer St Johns legend if there ever was one.

A native of Rathmore, Co Kerry, Diarmuid joined the club in 1992 having played with Bank Of Ireland prior to that. He was involved in playing with and coaching the first BSJ adult football team to come through the ranks of the club and his dedication and committment was embraced by the players as the team progressed from junior to intermediate to senior during his time involved.
At the same time he became involved in the management and coaching of the then u13 football team when his son Tommy joined the team. He continued with the team right through to minor level. That team then went on to form the basis of the 4th adult football team in the club and in their first year in adult ranks they won the division 8 title. He continued with that 4th team in its various iterations managing and playing up to his mid 60s until illness struck a few short years ago.
He was surely unique in that he played on the same team at various times over the years with both of his sons Paddy and Tommy. In addition to his playing and coaching contributions his fundraising efforts over the years, particularly the racedays, were also legendary.
I’m sure Diarmuid was over the moon to see Kerry reclaiming the Sam Maguire cup a few weeks ago and would have loved to have been in Killarney to welcome Sam home!
He will be sadly missed by all in Ballinteer St Johns who knew him. But he will be missed even moreso by his wife Kathleen, sons Paddy and Tommy, his grandchildren, his wide family circle and friends. We offer them all our deepest sympathy.
Ar dheis Dé go raibh a anam dílis.
Gerry O’Donnell
Team Trip to The Hague in 2007. 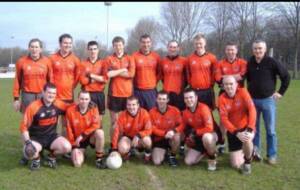 Winners in The Hague the first year the team went there.  Great memories. 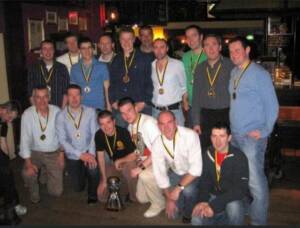 Presentation by Gerry O’Donnell & Peadar O’Shea to Diarmuid in 2013 following his appearance for his beloved Kerry against Kildare in Croke Park. 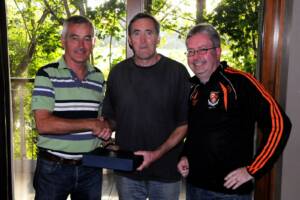 Diarmuid made the national news when he retired at the age of 66.  This is a lovely write up of his playing career and love for the GAA. 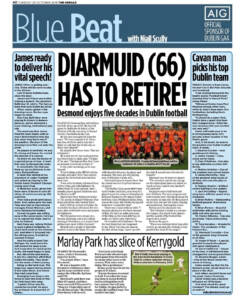